"And what do you suggest?"

"National Career Days 2011 "or what we saw at the careers forum this year?"
„National Careers Days“ forum for the tenth time ... Sofia, Varna, Veliko Tarnovo, Svishtov, Rousse, Plovdiv and Burgas. Every city with its charm, strengths and weaknesses, with its future and courage to dream. 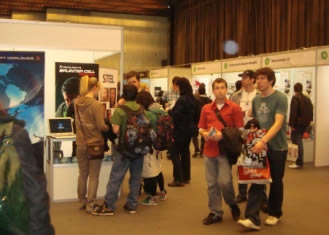 During our tour around the country we were able to compare the universities once again. Each with its interest and activity - whether to take part in the organization of the forum and support the professional development of its students. Or to count that students already know about the forum and that the organizers from JobTiger will handle it by themselves.

The picture was colorful- from full support, assistance and halls full of bright eyes, to lectures with a total of seven students, or third in which part of the students were invited to leave demonstratively our lecture and go to their tutorial on "Descriptive Mathematics." .. And we are there once a year for 40-50 minutes.

Outside Sofia students still come uncertain and proceed shyly for the brochures without seeking dialogue with us. Their attention is often attracted by all advertising materials - pencils, anti-stress balls, calendars, and whatever else is arranged on the stand. Rarely, students know in advance which companies take part in the forum, what positions are announced, what they are interested in. Few people bother to read the preliminary information at www.JobTiger.bg.

Sharp exception are the students from the Academy of Economics in Svishtov – trained, knowledgeable, eager to prove themselves, to find their challenge. These children have obviously come to a place where their teachers really care … taught them to fight, to dream, instilled in them courage and faith. Things that are not very common on our way across the country. But are, the valuable qualities that build success.

Despite the apparently high self-esteem of students from Sofia, they also often lacked the confidence in where they go, what they are good at and how to do it. You can tell that they are ambitious, bold and aggressive, but it's clear that they have no starting point nor mentors to advice them.

Amid all this, two conclusions arosed in my head, travelling the last kilometers from the way back to Sofia:

First, it seems (at least for me) that there is a clear need to include in the curriculum of universities the subject "Professional orientation and job search". In other words, students should understand first what they want, what they are good at, where and what opportunities they have and then to understand how to achieve them.
That's what I thought at the beginning of the forum, but in the last city I was sure it could even start at school. Professional orientation for students! In theory it should exist, but in practice it does not work. Still parents and their children are influenced by some fashion and the idea of a diploma, regardless of the potential of the young people and the prospects of the economy.

It is not normal one year at a university to have five groups of one major, like PR or to have "invented" majors serving the interests of teachers and the desire of universities to earn money. But since this is already happening, at least can be taught subjects related to self-discovery and realization of personal potential. Otherwise, it becomes a vicious circle, and downcast look and silence at the question "Why did you choose this major?".

Second, already associated with business. Young people want to stay in the cities where they learn, they do not want to move or at least not in Sofia. There are businesses that are wondering where – in which city to expand. Here again is where universities can demonstrate to the business that their students are well prepared and motivated. To find a way to interact, so that companies and university students are both satisfied. A question of will, a matter of perceived need. And action.

Obviously, we are far from the time to rank universities on how many of the graduates have started work, where they started and how long after graduation. As well as how many of them work in the field they've learned. We are, also, far from this classification Bulgarian students to choose in which Bulgarian universities to apply and what major. Yes, we are still far... And until then more and more young people will search opportunities and education abroad. One way.

In this context, for the next "National Career Days“ we wish to meet more people who know what they want, have the courage to seek it and are active participants in their own lives. Avanti!